It all started with biscuits

It all started with biscuits The story began in 1972, when a craft workshop was opened in Vrhnika, where biscuits were made. Stanislav Pečjak, Jože Adamič and Herman Kovač started their business at a time when entrepreneurship was still in its infancy. Despite difficult first steps, they succeeded. In Vrhnika it still smells like biscuits and pastries, now from Pekarna Adamič.

Figure 1: Biscuit production was a family business in which all family members participated. In the picture, Mr. and Mrs. Adamič.

But who will buy these products?

In search of the right opportunities, Stanislav Pečjak’s path led forward, this time to the production of pasta. In 1975, he and his friend Tonet Baškovč set up a plant for the production of several types of egg pasta. Stanislav’s mother advised against this decision, as “all housewives make their own pasta at home, but who will buy these products?” However, they did not let themselves be convinced, they believed that they could convince customers with quality of their products. The pasta was made from extra white flour with a high proportion of eggs. This was the right strategy! In just three days from opening, their orders exceeded production. It turned out that with a production capacity of 200 kilograms of pasta per hour, they will not be able to meet all the needs of customers. Customers were satisfied with good quality of pasta. This kind of pasta is still made in Vrhnika under the Baškovč brand.

Figure 2: Egg pasta pasteurizer. Pekarna Pečjak never used powdered eggs for its egg pasta, but only real eggs.
Figure 3: Tone Baškovč and Stanislav Pečjak during the construction of pasta production facilities. They have been business partners for some time, and even after the decision to go their separate ways, they are still close friends.

A successful path led him to the ultimate goal of founding his own company, which he succeeded in 1984. The first production unit was built in Škofljica, where Pekarna Pečjak still has its headquarters today. This is where pasta was first made. Years later, Stanislav Pečjak said in an interview: “It was a golden decision that made us great.”

Figure 4: Stanislav Pečjak knew all his employees by name. There were no development technologists at the time, so he spent a lot of time with the production staff and especially with the bakers, with whom he constantly consulted on how to make products even better.
Figure 5: Egg pasta mixer.

Know how to find new opportunities

The year 1991 marked the beginning of the war and the disintegration of the state of Yugoslavia. This was a big blow for Pekarna Pečjak with the loss of half of the total sales, as it was strongly present in the area of ​​Zagreb and Karlovac. The reduction in production and the threat of layoffs led the owners to reorganize part of their production. Then, in Škofljica, started to smell like biscuits, fresh bread and sweets. The production of the first frozen products also started. For some time, the strongest bread production was as much as 4 tons of bread products per day. Over time, however, instead of producing bread, the company focused more on producing frozen products.

In 1994, a new production unit of the company was opened in Trzin, first a pasta production line.

Figure 6: Mixer for rolling egg pasta with a strip leading to the pasteurizer.
Figure 7: In the production of pasta, we still use traditional preparation procedures, which also means more manual work. During the drying process, the pasta is folded and loosened by hand.

Figure 8: A container of boiling water into which the dough for water infusions is poured. When cooked, drain and dry.
Figure 9: Drying chambers for making water ingots.

In 1998, it was followed by a new line for the production of frozen potato and rolled dough products. In 2002, there was also a line for frozen puff pastry and puff pastry.

Figure 10, 11: Production of the Fritz line for rolled dough with filling, where burek began to be made in 1998, which is still one of the most important product groups of Pekarna Pečjak. Pictured are Stanislav Pečjak and Janez Uršič, representative of Fritz.

Figure 12, 13, 14: In 2002, the construction of the last part of the production of frozen products in Trzin was completed. In addition to production, the Trzin unit also has a purchasing department, a department for ensuring safety and quality, and a maintenance service.

The right things lead to success

For Mr. Pečjak, the quality of the products was still the one he paid the most attention to. His motto was: “Our customers are also our families, neighbors, friends. Offering anything other than the best is simply unimaginable. “«

Figure 15: He also received recognition from the Chamber of Crafts for his entrepreneurial success.

Transfer of management and expansion to foreign markets

Since 2005, the management has been taken over by his son Silvester Pečjak, and the company’s core management is supplemented by sisters Majda and Tanja, and other members of the Pečjak family. 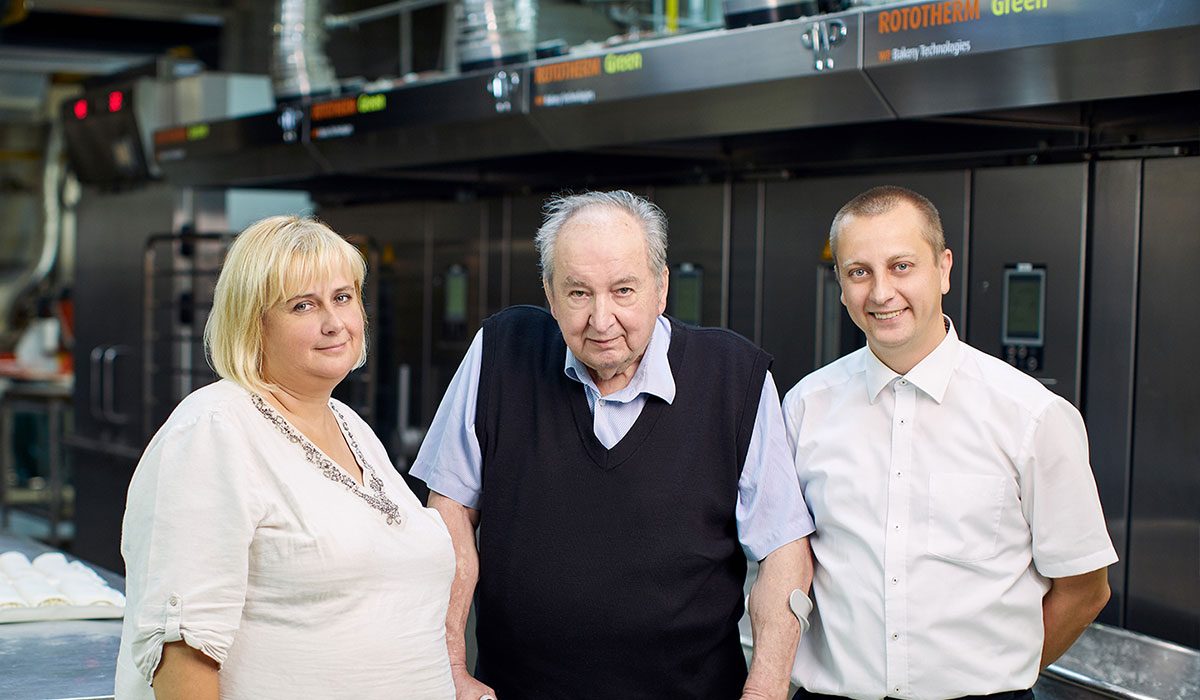 After Slovenia’s accession to the EU, the company began to open up to foreign markets, initially through distributors, and later with the opening of subsidiaries in some countries. Since 2014, when a subsidiary was established in Zagreb, sales on the Croatian market have become increasingly important. By establishing its own distribution network (with central points Zagreb, Rijeka, Split) and daily delivery of products from Slovenia, the company met the needs of Croatian customers. Today, it is mostly present in the hotel systems and the Plodine retail chain.

The most important export markets of Pekarna Bakery are Croatia, Sweden, Austria, Switzerland and Germany. It is also present in the markets of Montenegro, Italy, Slovakia, the Czech Republic, the Netherlands and the United Kingdom. Revenues in export markets represent just over 15% of the company’s total revenues.

In step with modern trends

The company is constantly keeping pace with changes in the market. The answer to the changing trends in customers ’eating habits was the production of vegan products in 2018 and the acquisition of the Vegan V-label certificate. Taking into account customized diets, special diets and other restrictions either health or just customer preferences, the company is developing special product lines. These are: organic (bio) products, vegan products, products without milk or eggs, products with functional properties.

High quality of raw materials and products, natural ingredients before substitutes, Slovenian origin and preservation of tradition by taking into account modern technological procedures of food preparation are still the values ​​of Pekarna Pečjak. Regarding the use of additives in products, which he always avoided, Stanislav Pečjak repeatedly emphasized: “Our preservative is cold.”

The quality of the products is confirmed by the gold medals of the Chamber of Commerce of Slovenia, which are received every year by the registered products of Pekarna Pečjak and represent the highest recognition on the Slovenian market.

Confidence in the brand is confirmed by consumers who, as part of the Trusted Brand selection survey in 2020 and 2021, chose Pekarna Pečjak as the most trusted brand for bread and bakery pastries.

Stanislav Pečjak passed away in 2020. He was a man of strong character, determined spirit and great courage, who often made bold moves on his way. He was popular and highly respected among the employees. He lived for the company he created, while maintaining a sense of fellow human beings, his employees. He passed this on to his family as well. On one occasion, he said: “Within a few days of the tender, we got all the workers we needed for production. This makes me happy because it means my kids aren’t taking advantage of employees.”

His family is determined to continue on the path he has outlined and where he has left his indelible mark.